The 2017 World Day against Child Labour was celebrated on the 12th June, 2017 at Sanfo M/A JHS. The program comprise of pupils from Sanfo M/A Basic school, Teachers, Community Child Protection Committee members, Director for CHRAJ, National Youth Authority, Girl Child Coordinator, Circuit Supervisor from GES, Deputy Coordinating Director and RRIG staff.
The Executive Director stated the purpose of the program as celebrating the World Day against Child Labour, a way of eliminating child labour among children. She explained child labour is a crime against the child’s health. Among the causes of child labour she stated were long distance between home and school and children who do not have enough care and support to enjoy school. The consequences mentioned included sexual abuse among girls, accidents and intimidation from their peers at school. She concluded that all stakeholders present should join the fight in ending child labour by 2025.
Mad. Aba Oppong encouraged parents to be mindful of the child’s needs which are food, clothing, shelter, love, care and attention. She added that children should not be pushed into doing any hazardous work. She concluded that anyone who engages in child labour or trafficking should be reported to the appropriate institution for the necessary actions to be taken.
SOME PICTURES FORM THE WORLD DAY AGAINST CHILD LABOUR CELEBRATION

Cross section of pupils of Sanfo Basic School at the program 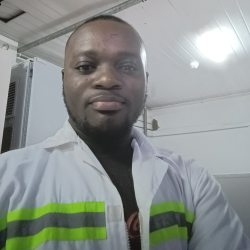